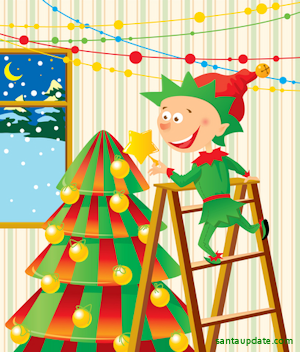 It’s already Christmas Eve in various parts of the world but we call Christmas Eve the time when Santa takes off. Once he launches, we begin the “Christmas Eve Party” at the North Pole and it doesn’t end until Santa returns home and we have “Christmas Day”. That’s just the way we do it here.

The preparations for the Christmas Eve party are happening right now. Decorations are being hung, lights are being put up and food is being prepared. We gather at the Claus compound to watch Santa on the sleigh cam (exclusive to the North Pole) and to play games, sing music and enjoy Christmas entertainment while Santa makes his way around the world.

The preparations for the Christmas Eve party also signal that things must be improving for Elf Bernard over at Santa’s workshop. Elves there are still working, from what I can from my window here, but more and more elves are heading over to the Wrapping Department to help out Elf Wally and his team.

We expect the first of the bed time warnings to be posted any minute now. With Santa scheduled to take off less than two hours from now he will be rushing south to start his deliveries. Only then will we have a clue where he is headed first.