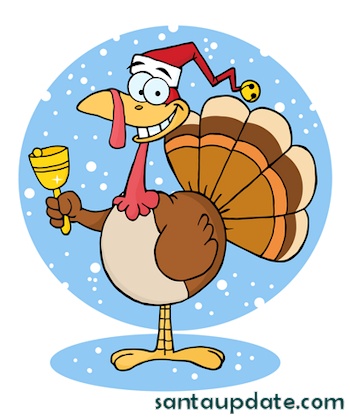 Santa’s favorite holiday is Thanksgiving. We’ve told you this many times before. In fact, Thanksgiving is a day Santa and the North Pole celebrates several times a year.

In Canada Thanksgiving is in October. Santa loves to celebrate Thanksgiving with his Canadian family and friends. Santa, after all, is a Canadian citizen (actually, he holds citizenship in several countries around the world). The North Pole is actually Canadian territory, so Santa is very closely tied with that country.

And, of course, Santa celebrates Thanksgiving with America in November, too.

But several other societies, old and new, celebrate Thanksgiving and Santa enjoys them all. There is a Thanksgiving in May, another event in July and two during the months of August and September — each.

Santa believes that giving thanks is an idea that appeals to all people everywhere and he encourages people to set aside their own days of giving thanks and showing appreciation for the blessings of life. Santa says gratitude is at the very heart of celebrating Christmas.