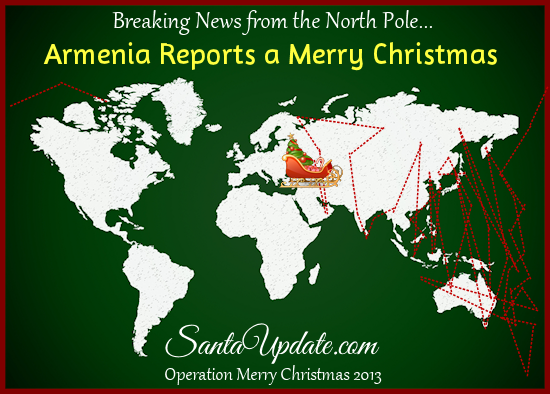 As the UK finally heads to bed — indeed, all of Europe now has headed that way — it appears Santa is visiting festive locations in Armenia, where folks celebrate Santa every year. The weather is clear and cool.

We are receiving a bunch of false reports here at the North Pole. We have false reports of Santa’s visits in Toronto, in Havana, in Mexico City and even in St. Louis. It isn’t even dark in most of those places yet but Elf Agent X is concerned because he feels there may be a concentrated attempt to throw off our tracking of Santa’s progress through misinformation. Of course, we have direct contact with Santa so we know exactly where he is. But still, that people would do that is something of a concern to us here at the North Pole.

Meanwhile, reports are coming in that North Korea is dropping its protest of Santa Claus to the UN and has sent a message to Santa that merely says “Thank you.”

And a Merry Christmas to you, too, North Korea.