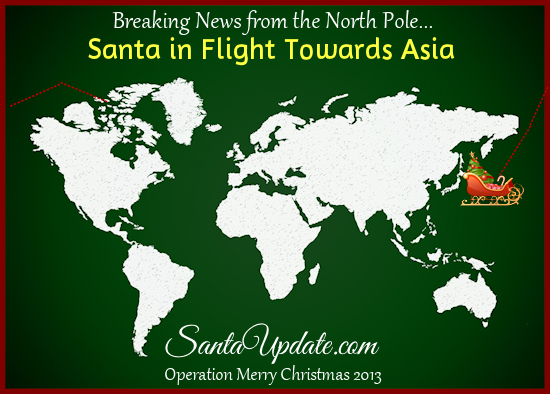 Santa continues his pre-delivery preparations aboard the sleigh as he flies high above the Pacific ocean at this moment.

We have been receiving a lot of email with questions about Santa’s sleigh. Folks want to know more about it.

Does Santa have food with him? What about a radio? Is there something aboard for the reindeer? Does he have emergency supplies? Is it cold? Is it hot? How does Santa keep from falling out? Does he wear a helmet or a seat belt? Can Santa touch the stars?

These are just some of the many questions we are receiving at this hour. I will do my best to answer them for you.

Santa is very safe in the sleigh. He does not wear a helmet or a seat belt, however. How he stays in the sleigh at such a high speed is one of the reasons Santa is a very large man. Some people assume Santa is fat and that is not the case. He’s actually very musclular and extraordinarily strong. That is one reason why Santa doesn’t take others with him on the sleigh — one has to be very strong in order to do it.

Santa has plenty of food, water and emergency supplies for both himself and the reindeer. If he crashes or ends up stranded somewhere in the world he has what he needs to survive until help arrives. Santa is tracked on this night by several military units, space agencies and, of course, by us here at the North Pole. It is highly doubtful that Santa will ever get lost without being found fairly quickly.

For Santa it isn’t cold or hot on the sleigh. That is regulated by his suit and he’s comfortable at all times regardless of the weather. The reindeer are a different story, however. They do very well in the cold and are quite used to that but the heat and humidity is hard on them, so Santa has to watch them closely, keep them hydrated and make sure they do not work in warm climates for too long. Elf Victor keeps several back up teams of reindeer ready to relieve at any point in Santa’s flight.