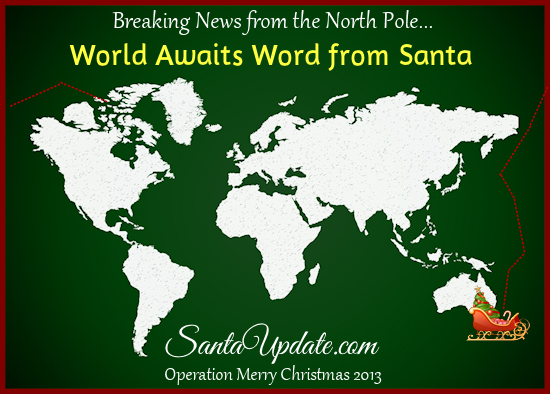 The clock is ticking and there has been no word from Santa for about 15 minutes. Right now, the Tracking Department cannot tell me exactly where he is.

“He’s ordered radio silence and he has turned his jammers on,” Elf Quinton said. “The jammers means that nobody can pick him up. It means he wants to be hidden and will not let anyone know where he is. We originally built them as a safety device but Santa uses them all the time to mess with us. Sometimes it is serious, like when he doesn’t want us to know or someone on the ground to know, exactly where he is. I still think he is about to make his first delivery and he doesn’t want anyone guessing where that will be.”

We are receiving huge amounts of emails, tons of faxes, telegrams and instant messages from concerned folks all over the world. There is no cause for alarm. We will keep you informed.