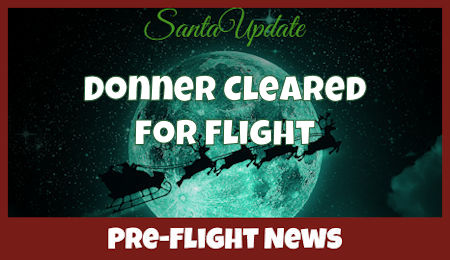 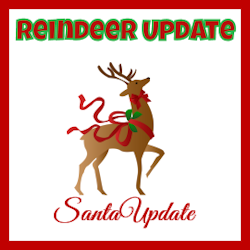 Doctors at Santa’s Reindeer barn say today that Donner is sufficiently healed and that he is cleared to fly for Santa this year.

As we reported earlier Donner worked out with the team yesterday and reported no problems. After reviewing video of the workout, Santa felt it would be okay to fly with Donner if the doctors signed off on it. They did.

That means that when the official roster of assigned reindeer for Santa’s A-team is released Donner’s name will be on it. That may happen some time today or later on Monday. I’ll be watching news from North Pole Flight Command closely.

Donner will have some extra monitoring equipment strapped to him. Santa has asked that a doctor be assigned around the clock to keep an eye on him. He has also instructed the Reindeer Operations Department to have back-up reindeer on standby in case Donner has any trouble or needs a break.

Several other reindeer, of course, volunteered for duty in that regard.

Some of the mail we have been receiving asked that if Donner was assigned to fly if he would require anything special in the way of food as he travels the world. That is an excellent question and one I will make sure I get an answer for soon. Stay tuned.

Secrets of Santa and His Suit