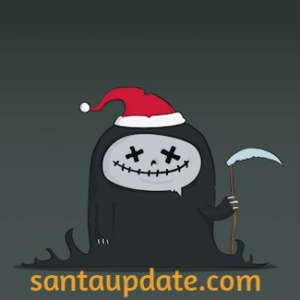 The biggest food fight in North Pole history happened at the North Pole as part of the annual Halloween Party.

It may not be right to call this a food fight. It happens every year, everyone comes ready for it and everyone stays to help clean up. In fact, the room is rigged with drop-down plastic to prepare the walls and before the food even starts to fly little face shields and goggles are handed out to keep everyone safe.

Even the food is prepared in such a way that makes it perfect for throwing. Yes, the food is of course edible and we all eat it during the party, during the food fight, and even after it is over. But the food has a certain quality to it that is different from food prepared for other parties.

Mrs. Claus really deserves a lot of credit for these nice touches she puts into the food fight.

The Biggest Food Fight is Started by Mrs. Claus

By tradition, and in the name of research I’m sure, Mrs. Claus usually starts the food fight. In fact, the elves have learned that if Mrs. Claus does not “throw the first punch” (and punch is a liquid, by the way, I literally mean “punch”) then there is trouble.

Speaking of punch, Mrs. Claus had pumpkin shaped water balloons filled with a special orange-colored fizzy Halloween punch, which made the fight not only extra messy, but also extra sweet. Nobody tried to get away when someone lobbed a punch-filled-balloon at them. In fact, some elves were trying to catch the balloons so they could drink the punch that was inside of them (it wasn’t available any other way).

Santa said we’d never recognize him and we didn’t.

Mrs. Claus came as Captain Nemo, a famous submarine captain featured in Jules Vern’s 20,000 Leagues Under the Sea, a book written about 150 years ago (Mrs. Claus always picks an educational type of theme to her costumes. She came prepared with a little pamphlet that explained the purpose and meaning of her costume, which is also something of a tradition of hers).

To match Mrs. Claus’ costume Santa came dressed in an ancient scuba diver’s outfit. He looked a little bit like this: 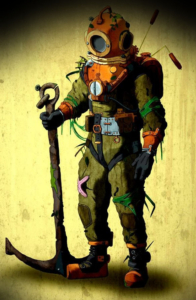 Nobody knew Santa was in that suit. The only clue they had was Mrs. Claus’ little pamphlet and the fact that Mrs. Claus was close to Santa most of the night.

Now, I ask you, does that suit look like it is made for enduring a food fight?

So, yeah, both Santa and Mrs. Claus did very well in the food fight. When it was all over and we started to clean up, Santa finally took the helmet off because it was pretty hot for him to wear it. By then, of course, we all knew he was inside the suit. But for the longest time he had people guessing.

But Santa was right. Nobody could have guessed he would have done that.

The suit survived not only the cupcake bombs but also the eggnog squirt guns, the pumpkin pies, the cinnamon bun torpedoes, the mashed sugared sweet potatoes, and the famous sticky chips brought by Elf Guapo.

It was only when a group of elves from Research and Development brought out the water canon that Santa fell to one knee from the sheer force of the water. He should never have gone out to the patio, because that’s where the hose was. But Santa recovered quickly because he had stowed in his pocket a bunch of exploding stink bombs he packed away before the party. That created a diversion that was just long enough for him to get to his feet and re-arm himself with more balloons, cupcakes and pies.

Of course the costume contest was fun and the boys in North Pole Radio News report on that in the player below.

In all, the Halloween Party was a blast. We made a huge mess. But we had a lot of laughs and fun even cleaning up from the party. After we got the room cleaned up many of us too one look at the mess we were and went outside and engaged in a healthy snowball fight — all in the name of cleaning ourselves off, of course. We don’t know where all this snow came from but we were glad, at least for a little while, to have the snow to play in after the party.

I think the party this year was excellent. It really was a stress reducer for elves who have worked hard this year and been largely away from each other most of the year. Like many of you we have been in lock down.

It was good, even important, as Santa said, to see each other and to be with each other.

We had to wear masks, even under our costumes. But it was worth the effort and the fun. We had a great time. We hope you did too!

Happy Halloween from the North Pole