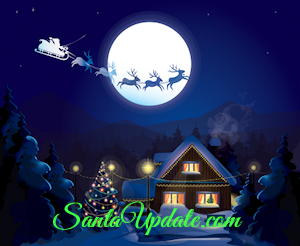 Test flights of Santa’s sleigh look to be getting a boost this week. In a big meeting of head elves at the North Pole with Santa Claus today a great many things was discussed. Operation Merry Christmas in only about a week away and Santa wants to make sure everything is on track.

The biggest change that was decided upon had to do with the new sleigh Santa hopes to use on Christmas Eve. He has ordered several new prototypes built so that test flights can be expanded.

In order to facilitate the increase in test flights Santa contacted the Bright Star Ranch in Argentina to send 2500 additional reindeer to the test flight team. Bright Star is one of Santa’s reindeer ranches that specializes in the training of reindeer specifically for test flight duty.

Another topic that came up today was the glaring absence of the reindeer. In recent weeks the topic has become a huge concern for elves at the North Pole.

Santa said he had no information about their potential arrival date. He did say that he expects to see them “any day now”.

In other news a couple of new chats have been scheduled for this weekend. Please see the chat calendar for more information about the scheduled chats with Mrs. Claus and with Elf Crash Murphy this weekend.

We can expect as well some news soon about new availability for private chats with Santa, which were quickly booked when this new feature was announced. Today Santa discussed the possibility of developing a waiting list as well, and that is a new capability we are working on.

Many of you are asking for news relative to the Tracking Santa App. I don’t yet have a release date but we’re told it will become available shortly. More news on this is to come very soon.

Below is a North Pole Radio News report of today’s announcement about the new sleighs Santa has ordered.

Concerns About Reindeer Voiced to the North Pole