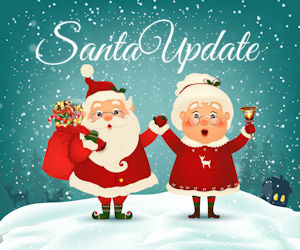 The first full day of this week has revealed a few minor problems with Operation Merry Christmas.

The weather is hampering efforts to get the Reindeer Games going for one. For 40 straight days we have had snow and that should not be a problem, especially for the reindeer. They love the snow. But the problem comes from those who want to come watch the reindeer games and accommodating them for places where they can sit. Keeping those seats clear of snow is an issue. It is anticipated that the Reindeer Games should begin by the end of the week.

A new report has come out from the Research and Development Department about Santa’s sleigh. It appears a design issue has come up that affects Santa’s sleigh at very high speed. We understand that engineers already have a solution to the problem and are working on a fix. It should not hinder Santa’s flight but it does change the plan for test flights.

And finally, the North Pole Radio News team headed to Santa’s workshop late Monday to report on the progress being made from their part in Operation Merry Christmas. They were not given access to the people or the information required.

I have already reached out to the management of the Workshop about this issue and have been assured that the Workshop is running smoothly and that in future visits the news team will be treated better.

You can hear the Radio News report below.

In other news today Santa endure what he called his “annual job as a model”. He spent the day in Mrs. Claus’ sewing room being measured for his new suit. Santa usually wears a brand new suit every Christmas. Of course, this isn’t like any kind of suit that anyone ever wears. It has special things built into it. You can learn more about it from the North Pole Flight Command website.

But the suit begins with Mrs. Claus, who is also Santa’s personal tailor.

Mrs. Claus was taught to be a seamstress by her mother. Her mother was a very famous seamstress in Germany, who made clothes not only for her family but also for the German Royal Family for many, many years. It was a family tradition passed down from many generations.

While Mrs. Claus does not make all of Santa’s clothes she does make his famous red suit and each year he gets a new one.

The hardest part for Santa in the suit making process is getting measured, which is what he did today. It is not a process likes much but one he says he puts up with to “keep the Boss happy”. (Mrs. Claus doesn’t like it when he calls her “the Boss”).

These minor problems with Operation Merry Christmas are normal during this early point in the season. We don’t expect any of the issues mentioned above to be a reason for slowing things down.

Sleigh Bells are Already for Santa