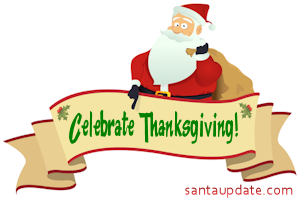 I bumped into Santa this morning and he was even jollier than normal. I asked him why and he said that his favorite holiday was just a few days away.

Things have been so busy here that I almost forgot that Thanksgiving was this week. Yes, Thanksgiving is Santa’s favorite holiday.

Santa loves Thanksgiving so much that we actually celebrate it multiple times a year here at the North Pole, not just in November.

“A thankful heart should show its appreciation all year long and not just one day a year” Santa says. “While Thanksgiving is a great way to ring in the holiday season it is also important to take time the rest of the year to spend with your family and friends. It is important to take a break every now and then to look around and realize what you have been blessed with.”

Stick around! Our first “official” updates from the North Pole are just around the corner.