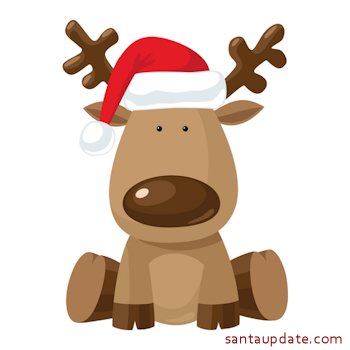 It is happening just as Elf Victor said it would — reindeer babies are being born all over the place here at the North Pole.

“The first one came the other day just after I talked to you,” Elf Victor told me. “A lovely reindeer named Hannah gave birth to a little doe. I had to call Santa and ask him what to name her. He made me take a picture of her and send it to her and Santa named the little girl “Star”.”

But since Star was born more than 27 other reindeer have been born. In fact, the vet hospital at the North Pole is bursting at the seams with mamas and their babies. Elf Victor had to get a team of elves from Santa’s workshop to come over and build an addition on to the hospital to handle all the babies that are expected before Christmas.

The North Pole has a reindeer problem bigger than new babies coming. With the Reindeer games about to start there are thousands and thousands of reindeer here at the North Pole, including all the babies who were born last spring. Like these new babies this week, none of this little reindeer have names because Santa has been so busy he hasn’t had time to name them. Some of these reindeer aren’t so little any more either. One reindeer that folks have taken to calling “99”, after his birth weight, is now almost 500 pounds and his antlers are coming in BIG. And Santa still have to give this boy a name. There are thousands of nameless young reindeer here at the North Pole that all need names.

I asked Santa if there was a way we could get some help with this baby naming project. After all, it is tough enough having all these reindeer around but when you can’t even tell the young ones apart things get confusing. All the elves working with the reindeer to feed them and play with them just say “Hey you!” to each reindeer and everybody is just confused. This isn’t the end of the world but it is a big problem and I told Santa that with the thousands of letters we get each day at the North Pole asking about the reindeer that we could problably find lots of kids out there who could suggest names for all of Santa’s new reindeer.

I didn’t think Santa would go for that as he likes to name the reindeer himself. He doesn’t even let Elf Victor name the reindeer. But actually, Santa got really excited by the idea. “That’s a wonderful suggestion, Ernest,” Santa told me. “I love this idea. It will give the kids something to do and I know they will come up with lots of good ideas. Here is how it should work: ask the kids to send in their name suggestions. Give them a way to do it on the websites, Ernest. You take all those suggestions and once a day you give them to Elf Victor and to Elf Gloria. And together, Victor and Gloria can use the list and decide which names will belong to each reindeer after they get a good look at each of them. Start with the oldest ones first. And save the very last baby born at the North Pole this year for me, and I’ll name the little one on Christmas Eve.”

So that’s just what we’re doing. Click on the link at SantaUpdate.com to suggest a reindeer baby name. It would help Santa out a lot!