The cities, towns and villages along the eastern coast of Australia are all reporting a Merry Christmas to the North Pole. Emails are flooding Santa’s post office by the thousands.

Meanwhile, I did a check with Elf Bernard in Santa’s workshop and the news there continues to be surprisingly bad. “We may have to suspend the Christmas Eve party over at the Claus residence,” Elf Bernard told me. “We have never done that before but we’re just having a hard time digging out of this hole. I’m thinking of sending word to Santa to slow down. Right now he’s delivering in places around 1am or 2am local time and if he just holds until 7am or so and talks the kids of the world into sleeping a little bit longer I think we can get this thing done.”

I don’t think that’s going to happen. So if the party gets cancelled we’ll just have to party that much harder here at the North Pole once the job is done. 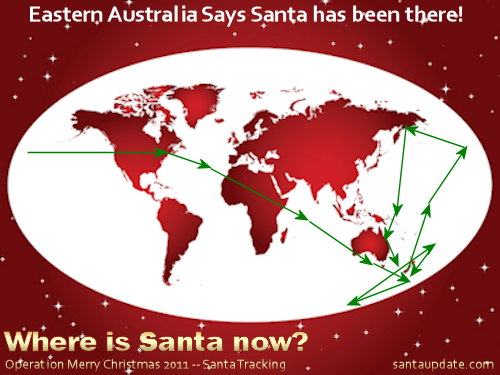