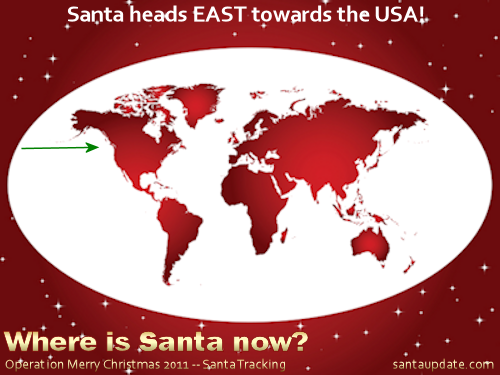 Santa Claus has just crossed the International dateline and is headed EAST over the Pacific ocean and towards the United States. This is a very unusual course for Santa and the Tracking Department doesn’t know what to make of it.

“What is Santa doing?” Elf Billy said. He was calling me to see what Santa was up to.

“What are you asking me for?” I told Billy. “You’re the one tracking Santa. What in the world is he doing?”

Elf Billy hasn’t a clue what Santa is going. But at this moment he is traveling east over towards the United States.

As soon as I know what is going on, I’ll let you know.