Santa has met up with Elf Victor at a remote ranch high in the mountains of northern Russia. He indicated a little while ago that he wanted to give his A-Team of reindeer a rest but we thought he might make that change elsewhere. Elf Victor left by express sleigh a little while ago because he was concerned that with the recent illness suffered by the reindeer that they may not be well. It appears that Santa and Elf Victor are working out of an abundance of caution.

On the B-team this year are several strong girl reindeer: Daisy, Meggie, Flora, Gwendolyn, Regina, and Lupe are teamed with Thor and Odin in flying Santa for the next little while. All are champions and feel quite honored to be on the back-up squad this year.

From email we have a question from 8 year old Denny G. of Youngstown, Ohio who asks if Santa has enough reindeer to get through his flight. The answer to that question is yes. The North Pole has hundreds of sleighs in the air right now with various elves moving around in support of Santa. But even for all the reindeer engaged in such work there are hundreds more still at the North Pole who are ready and able to help Santa at a moment’s notice. So there are no concerns that Santa will run out of reindeer. 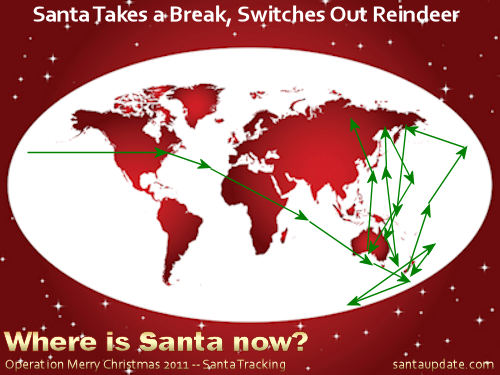