Santa is keeping his focus on Africa at this time. My guess is that he’s trying to keep his A-team out of the heat of the southern areas so he’s going to push his B-team for a little while longer. Expect Santa to head north very soon.

Reports from Elf Hugo are coming in too. He’s now with Santa’s A-Team and will be heading west in a little while. We’re not sure where he is meeting up with Santa.

One surprise to report though: he’s got Mrs. Claus with him. I’m not sure what that is all about. Last I heard she was headed back here to resume the North Pole Christmas Party. But the Claus residence remains dark and Mrs. Claus is once again out on a sleigh in the cold. We’ll try to find out what is going on. 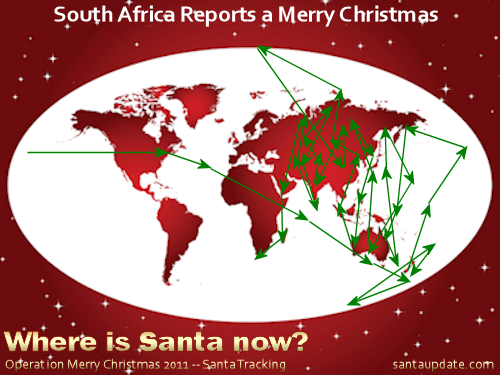