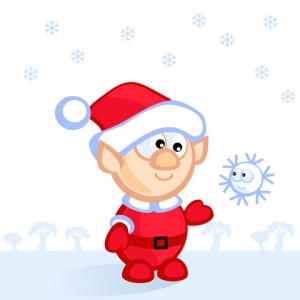 “I saw him!” 9 year old Jake M. from Santa Fe, New Mexico, USA reported. “I was looking out my bedroom window at the stars before going to bed and I saw a streak in the sky. It looked like Santa’s sleigh to me. There were six reindeer and it was moving really, really fast!”

Hundreds of similar reports have been coming into the North Pole over the past several hours. Elf Billy, who not only watches the weather but also heads the sleigh tracking department, was not entirely happy to hear such reports. “We normally don’t want to be seen in the skies,” Elf Billy said. “We try not to fly over populated areas or during times when a lot of people might be awake. But this is a real emergency. Santa needs the help of these elves and he has to get them to the North Pole. We have done all we can to get the help we need.”

I have not yet had time to check on how all these new arrivals are doing here at the North Pole. I know many of them are here now. And I also know that the big storm predicted for the North Pole has arrived as well. The big winds we were told would hit us are here and the noise outside is unlike anything you have ever heard. Because it is Sunday here at the North Pole the workshop and other non-essential areas are closed for a day of rest and worship. Later today I expect to see some new faces at Church. But I won’t know until tomorrow if Santa has all the elves here that he wanted.

Yes, we are expecting some damage. Many elves have worked in their off time the past few days taking down their Christmas lights and loose Christmas decorations. This storm is so bad they could lose them all. Everyone has worked really hard to be ready for this storm. We think things are pretty safe now. We just hope all those elves and teams of reindeer made it back to the North Pole in time before the storm hit. We will know tomorrow.