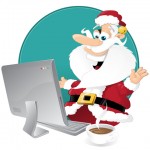 It has been about month since our last update and this is our first of this year — 2013! We know it is early but judging from the mail we have received there is a lot of interest in what is going on at the North Pole.

How was your Christmas? Ours was wonderful. We have kept the updates of Santa’s travels active so you can go back and read them again, if you want. We enjoyed a Christmas party after Santa returned to the North Pole that lasted well into the late morning hours. Then we all, including Santa and Mrs. Claus, stumbled off to bed for a long nap.

The big snow storm that blew in just before Christmas hung on for a few days so every one pretty much kept to the indoors. That was fine because we all had plenty of rest to get, food to eat and lots of new things to play with. I received a new sled for Christmas myself, just like the one I had when I was a kid, except a little bigger to accommodate my old man body. So I get plenty of playtime, even out under snowy skies.

The questions that we are receiving via email and letter these days all seem to center around what we do now that Christmas is over and the next Christmas is so far away. The truth is that we’re already back at work. We took the day after Christmas off, as we always do, but then the morning after that we set down to work.

For Santa, that meant catching up on things in his office. As you may know, he receives a lot of mail and he spent a lot of time working on that. But by the time the first week of January came around he met with us all to talk about Christmas next year and what we plan to do. So we are already hard at work on Christmas 2013.

As of today it is exactly 11 months until Christmas Eve. Well, technically, we have less than 11 months, because not every month has 31 days. The big countdown clock in the workshop has started and everyone here is working to be super prepared for Christmas 2013.

My main goal this year is to do a better job keeping you informed of what we do here at the North Pole. So you will hear from me at least once a month as we countdown the days to Christmas.

Thanks for all your emails, cards, letters and faxes! Keep them coming!

Santa Returns to Cheers at the North Pole Santa Update Countdown: 10 Months til Christmas Eve!
Scroll to top
%d bloggers like this: