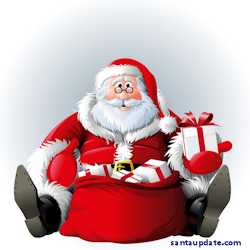 One of you just had to bring it up, didn’t you?

Oscar G. of Tuscon, Arizona USA wrote in this very to-the-point question: How does a fat man like Santa get down the chimney?

Now, on to your chimney question. It is actually a very good question because Santa is a big guy. Some people make the mistake of thinking that if Santa can go down a chimney then anyone can. Ask any firefighter or any emergency dispatcher and they will tell you that every once in a while they have to rescue people who try to go up or down chimneys. DON’T EVER TRY this, kids. Chimneys are for experts only.

In fact, Santa doesn’t always use a chimney.

(That is part of the reason Oscar is asking the question. I talked to Elf Agent X and he says that Oscar does NOT have a chimney on his house and that Santa has to go in through a door at Oscar’s home in Tuscon. Don’t ask me how Elf Agent X knows these things.)

Anyway, Santa only uses a chimney when he has to.

And when he does he says that it takes a lot of special magic in order to do it. Some movies show Santa getting really small to get into a chimney and other movies show chimneys changing size and shape when Santa uses them. But Santa says it doesn’t really work that way.

Santa says the chimney is more like a portal than an actual chimney. He says he actually uses a chimney more to look into a house to see if kids are really asleep than he does to get into the house. Most homes, Santa says, are unlocked on Christmas Eve because most people know that Santa is coming.

Santa says he avoids going down chimneys because Mrs. Claus gets a little upset when he gets his suit dirty. Plus, Santa points out, it is much easier to eat cookies with clean hands.