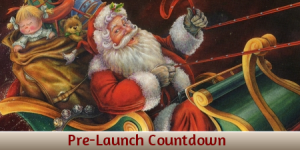 Santa launches in 12 hours and there are questions flying all over the North Pole.

Why was Santa’s sleigh on a test flight in North Korea? What happened that caused Elf Vernon to lose an entire load of coal there? Is Santa really sending a message to North Korea?

What does all this mean for Santa’s flight later tonight? Was it an accident?

If it was an accident, what does this mean for the stability of Santa’s sleigh? After all, if the sleigh could lost a whole load of coal over North Korea could the sleigh lose a whole load of something else over, say, the Pacific Ocean?

Is Santa’s sleigh ok? Is it ready to fly for real tonight?

It is a good thing all the elves are busy working. Otherwise they would be sick with worry about whether or not Santa will really deliver tomorrow.