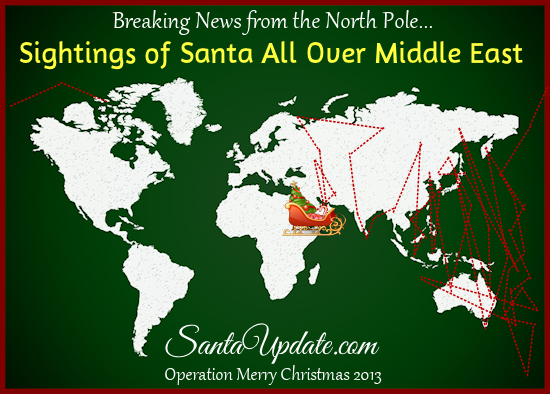 Syria, Saudi Arabia, Jordan, Yemen and Kuwait are all reporting visits from Santa Claus in the past few minutes. If Santa is moving slower we certainly cannot tell from the reports coming in from around the world. Santa continues to be well ahead of schedule.

As Santa spends more and more time in the South concerns mount for the condition of the reindeer. But Elf Victor says he has absolutely no worries.

“Santa is using his third team of reindeer.” Elf Victor explained. “Most years he only uses two. This team didn’t even start until Santa was in Siberia, which wasn’t that long ago. They could likely finish the ride all by themselves but I have a feeling Santa’s A-team would feel they are not doing their job. I expect Santa will change reindeer again and likely soon. That means reindeer fatigue really won’t be an issue for the remainder of this flight unless something really unusual happens.”