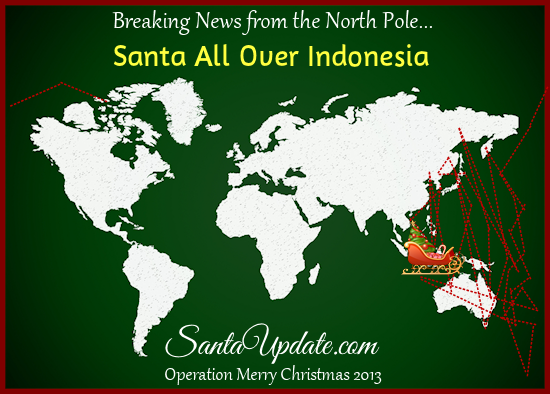 Santa has again returned south and is working the islands of Indonesia as we speak.

Meanwhile, at the North Pole a team of reindeer — traveling without a sleigh — is now headed south under the direction of Elf Harold of the Reindeer Operations department. He will be meeting up with Santa soon to trade out the reindeer and bring the B-Team home.

The C-Team of reindeer is made up of Flash, Goober, Thor, Sprinkles, Twinkles, Hack, Voltaire, and Spaz. “That is a good mix of speed and power,” Elf Victor said. “I don’t know how long Santa will use them but he could go a long, long way with that bunch.”

There are some familiar names in that group that we have seen in past years. Flash and Thor especially have done a lot of special work for Santa in the past and it is a thrill for them to see duty acutally flying Santa around the world on Christmas. This is a big, big day for them and their families. You should have heard them cheer when their names were read before they lifted off.

Some of you are writing in to find out if Santa’s A-team of Dasher, Dancer, Prancer, Vixen, Comet, Cupid, Donner, Blitzen and Rudolph will be back. The answer is most likely “yes”. They have been moved to a location further west where Santa will likely pick them up again for use later in his flight.