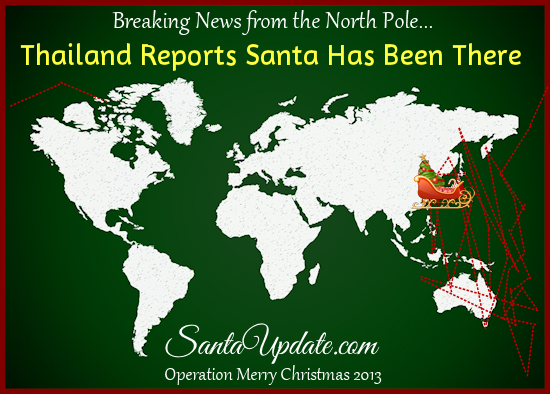 Santa continues to deliver at a rapid pace. Cities and villages alike in Thailand are reporting a Merry Christmas to the North Pole at this very moment.

Over on Kringle Radio Elf Quinton just delivered some news that was quite contrary to what Elf Agent X told us a while ago. Quinton said that six sleighs with powdered sugar bombs were dispatched to North Korea and did drop their payloads. Elf Agent X said there were no sleighs there but only halographic images of sleighs. Which story is true?

Elf Delbert sorted it out for me. He says that Elf Agent X was correct in that halographic images were used of sleighs in North Korea. But far above the cloud cover and out of reach of the North Korean military several sleighs did in fact discharge the powdered sugar bombs. “They were harmless, sweet clouds of dust. It descended like fine snow on the country side and it gave Santa a smokescreen to hide behind so that no one would see him.” Delbert said. “Santa was very fast and by the time all the white dust settled he was there and gone. It was a very successful operation and now North Korea has some of the sweetest snow the world has ever seen.”

What an awesome story of Christmas delivery.