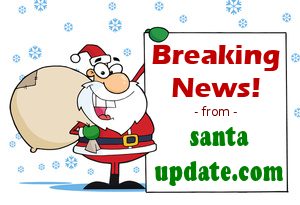 There are big meetings going on at the North Pole this morning. Santa called in his head elves from the Tracking Department first. Then the North Pole Security Department led by Elf Agent X came in. The doors have been closed — locked, in fact — and nobody has come out of there for hours.

We follow a pretty tight plan at the North Pole. These meetings were not on anyone’s schedule. In fact, Santa was supposed to be out of town.

But he’s here and there are big things going on.