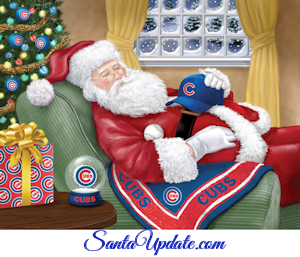 Several astute fans of Santa have written to the North Pole today to ask if Santa is pleased the Chicago Cubs have won the World Series.

As many know, in his annual interview every year Santa has mentioned the Chicago Cubs. He first brought it up in 2004, indicating that he had been a fan the last time the Cubs had won the World Series.

And like many Cubs fans Santa has endured a long, long drought between championships. Of course he is pleased. I contacted his office today and they gave me the following statement to publish:

“Congratulations to our Cubbies! What a great game, a great series and a great season. I normally don’t speak out on sports championships but given the interest in this particular one I think it is okay to say, just once at least, GO CUBBIES! Thanks for the great memories — Santa Claus”.

As Santa’s annual interviews reveal Santa is an avid sports fan. He has many favorite teams and players. But he has a particular love of baseball, mostly because the baseball season matches up with his schedule so well and because he played a lot of ball when the game was new.