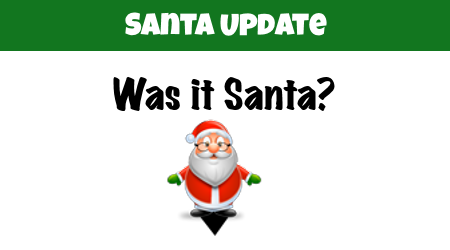 Santa left the North Pole on foot 11 days ago…and we have not heard from him since. But a report received via SantaTrackers.net says Santa was spotted in Alaska.

Analysts from the North Pole Flight Command and Tracking Center are evaluating the report now.

Mrs. Claus says she doesn’t expect to hear from Santa for a while.

And she says not to worry.

That is a pretty important thing.

Mrs. Claus, you see, is a first class worrier.

But we don’t suspect Santa wants to be found right now. When he left he was very introspective.

That means he was focused and that he had a lot of things on his mind.

I’m not gonna lie. It is feels pretty strange not having Santa around at this time of the year. In a weird way, it kind of feels like Christmas-time already.

You see, Santa is always gone in the month before Christmas.

I know I am not the only one feeling that way. It is a feeling you get when you know there is a lot of work to do. And a LOT of work is getting done at the North Pole right now.

So don’t worry. If there is news to report of Santa, you’ll hear it right here.

And if that really was Santa that someone saw in Alaska, we will confirm that for you right here.