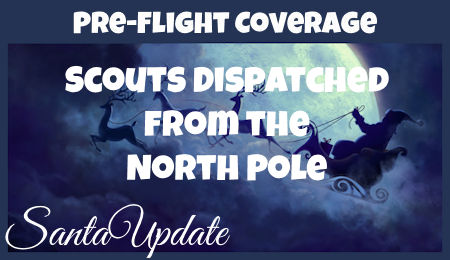 We’re another day closer. Another milestone in Operation Merry Christmas has passed as scouts were dispatched this morning from the North Pole via sleigh to different destinations around the world.

What is the difference between a scout and the professional trackers we told you about the other day?

Professional trackers track Santa. Scouts are sent from the North Pole before Santa ever takes flight. They are sent on special missions to specific areas.

Some of the work they do is secret. Usually the secret stuff is work these elves do with countries, governments and military units to coordinate Santa’s flight into certain areas. But most scouts who are sent out ahead of Santa’s flight are looking to provide information back to Santa about a person or a place. They are seeking specific answers to specific questions.

How many of these scouts are there?

Not that many. I don’t have an exact count but in the meeting I attended yesterday where they were instructed I counted roughly about 1000 such elves.

They are leaving the North Pole today by way of express sleigh to different destinations. Once they arrive at those destinations they likely head out on foot or are picked-up by prior arrangement by someone in a car.

These elves work very quietly. It is very doubtful that anyone would recognize them as an elf or know of their special mission. Most should return to the North Pole before Santa ends his flight.

Donner Getting Stronger
Scroll to top