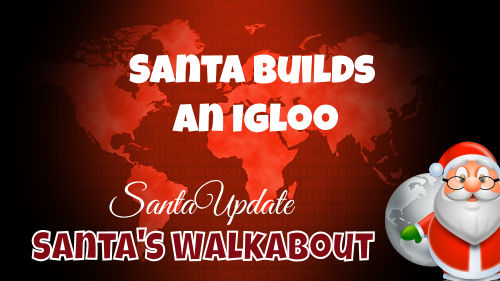 (Special to the North Pole) — Santa Claus began his walkabout on January 11th. A “walkabout” is a journey with an unknown destination. The purpose of the journey is to learn. This is something Santa has done every five years or so for many, many decades.

He has asked me to journal his walkabout so you can know of his adventures.

We began on foot. It has been a challenge for this elf. I’m not much of a hiker and I have never done anything like this before.

We started from the North Pole wearing big snow shoes. That makes walking easier in deep snow. But it is a very slow way to move.

Complicating things is the fact that I am much shorter than Santa. So it takes me longer to move forward in the snow, even though we are wearing the snow shoes.

But Santa has been kind and patient with me. He knows this is my first time.

Santa is also something of an outdoorsman. He knows how to hike and camp. He is aware all the time when animals are nearby. Santa can build a fire and make a shelter. Even in the snow!

I have no experience with such things. So while this trip has the purpose for Santa of learning many things I feel I am the one doing all the learning. It is very new to me.

For the first several days we walked and walked without seeing another person. It has been very cold and so far we have survived through two very big snow storms.

But yesterday we came upon a small village near the Arctic Circle in far northern Canada. That was where Santa finally got a chance to learn something new.

They speak a native language here that I do not understand. I do not know even what to call the language. But Santa knows the name of it and can speak it. He called it a native Eskimo dialect. Whatever that means.

The people were very friendly. When they saw we were going to set up a tent to sleep in while we visited they insisted that we instead build an igloo. This is how some of them live all the time during the winter.

When Santa admitted that he had never built an igloo they offered to teach him. That made Santa smile like you wouldn’t believe.

First they cut some ice blocks out of a nearby river. That took some time and it took many of us to haul the ice from the river to where we wanted to build the igloo.

I was surprised at how much ice it took and how big the igloo would be. But by working together Santa and his “guide” laid out a big circle with the ice on the ground.

The ice was stacked like giant Legos. We staggered them on top of each other and then packed snow into all the cracks. It was amazing to help it come together.

Through this process the walls eventuall formed kind of a ceiling. They just came together.

Over some of the larger cracks Santa had us gather tree branches and sticks to place in with the snow we packed in. By the time it got dark we had a nearly completed igloo with just a small hole in the ceiling where we could see the sky.

Then the most amazing thing happened.

The tribal chief built a fire inside the igloo! The people started to bring in things to cook and they sat around the fire while the meal was made. Santa and I both looked at each other anxiously.

But the fire did not melt the ice.

In fact, it caused the walls to get stronger because water would run down the sides of the wall from the top of igloo. The water did not run — it trickled just a little bit.

As it ran down the walls it froze the closer it got to the ground.

The chief explained that the heat from the fire and the people helped the snow and the ice to thaw just enough to fill the cracks in the igloo.

He said that process would continue if Santa and I slept in the igloo over night and kept the fire going.

And you know what? He was right!

We have been here for a few days and now our igloo is like one solid piece of ice. It is warm inside and there are no leaks from wind or cold outside coming in.

It is as sturdy as any cabin you can build.

We will leave here in the next day or two but the chief said our igloo will last all year long. He says that when we leave they plan to use our igloo for many things. And he told us that when we venture back home to the North Pole later this year we can stop and use the igloo again.

Santa told me last night when we were talking that learning to build the igloo was important to him. He says we might use igloos now at the North Pole for special projects. He said it has given him many ideas.

I do not know where we are headed next. But I will write and send messages like this to Elf Ernest periodically.

Santa Heads Out on a Walkabout

11 Months Until Christmas
Scroll to top