With about a week to go all eyes at the North Pole are on Santa’s Workshop. The question here everyone is asking is “Will they get it done this year?” 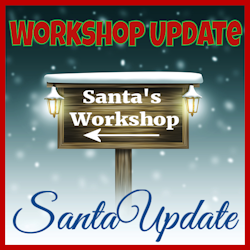 Everyone questions that because of what happened last year.

A last minute snafu was discovered in the count of toys last year and elves from other departments had to rush to the Workshop to help make up the difference. Most of the North Pole did not enjoy the annual Christmas party last year because they were working long after Santa had launched from the North Pole. It was a disaster.

Nobody wants that this year.

From the looks of things it appears this year’s efforts are well in hand. I spoke with Elf Bernard, who is the head elf over there, as well as several production supervisor elves. They all said the same thing: everything is on track and, in fact, Santa’s workshop might get done early this year.

They started a new thing. The idea came up in a meeting last January talking about all the problems last Christmas Eve. It is called the Department of Redundancy Department. You can hear about it in the latest report from North Pole Radio News, in the player below.

1 Week Until Christmas
Scroll to top