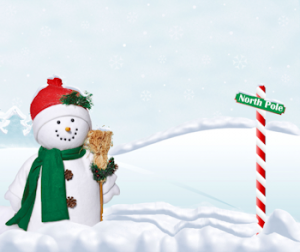 Santa employs thousands of elves around the world. But right here at ground zero of Operation Merry Christmas there are a few elves we feel you need to know about — especially if you read the Updates here on SantaUpdate.com.

After all, Santa is not the only person who is working hard for a Merry Christmas!

There are elves who wrap, elves that track the weather, and elves who pack the sleigh. There are mailroom elves, food elves, decorating elves — even singing elves. There are so many elves we can’t begin to explain them all. So here are some of the biggest names of the little guys who help The Big Guy make it all so merry:

Public Relations
Elf Ernest
He gets almost as much mail as Santa– and he’s just the guy for the job!  If there’s anything you want to know about Christmas, Santa, the North Pole, reindeer, Operation Merry Christmas or anything having to do with Christmas, Ernest is your man.

Columnist for The North Pole Gazette and Infamous Santa Defender
Elf Ed Zachary
Probably the most plain-spoken elf you’d ever want to meet, Elf Ed Zachary writes for adults and others dubious of Santa Claus and his cause. Beware, dear reader. Elf Ed is a straight shooter — and he doesn’t mince his words.

Department of Reindeer Operations
Elf Victor
Santa doesn’t just employ eight tiny reindeer — he’s got thousands! And the huge facility called Santa’s Stables here at the North Pole is run by Elf Victor. Not only does he care for the reindeer, but he organizes the annual reindeer games — and with Santa he hand selects the chosen few honored to serve Santa each year.

Department of Elf Resources
Elf Sandy Claus
Someone has to do all the hiring and firing around here. That’s the job of Sandy Claus.

Santa’s Workshop
Elf Bernard
Santa’s workshop is a place just about any kid would want to visit. It is run by Elf Bernard — a very old, wise and plain spoken elf who understands the pressure of the season like no other person in the world. Charged with producing Operation Merry Christmas, Elf Bernard has been known to use any resource at his disposal — including Tooth Fairies — to make it happen.

The Wrapping Department
Elf Wally
The wrapping department has a complex assignment — take every Santa surprise and make it look merry. And it’s a job every elf in the wrapping department takes very seriously. This merry bunch is lead by Elf Wally — a frenzied, high-energy and worried sort who always finds a way to get the job done before Santa takes flight.

Commissioner of Traditions
Elf Gloria
She may be the oldest elf at the North Pole — some say, she may be almost as old as Santa himself. She may move slow and be a little hard of hearing, but she has a heart of pure gold. She is a Christmas purist — and nothing happens at the North Pole in any department without her say-so. She makes sure the colors are right, that the bells ring true and that the spirit of the traditions of Christmas are preserved.

Weather Department
Elf Seymour Snow
Elf Seymour Snow and his team of elf-geeks sit around their computers and watch the weather around the world. They are responsible for weather tracking for Santa on Christmas Eve and for helping to make his flight plans each year. They have a huge, impossible job that constantly changes.

Turn Your Head and Cough!
Elf Lionel
Elf Dr. Lionel P. Spock has one mission every year: keep everyone well and free from the dreaded Bah-Hum Bug Bug — an ugly virus known to sap holiday cheer. He’s the medical expert here –and he’s saved the day many, many times.

Research and Development Department
Elf Quinton Q. Quigley
Elf Quinton is in charge of Santa’s sleigh. From setting new speed records to getting Santa safely back every year, Elf Quinton is the master of flight.

Department of Security
Elf Agent X
We don’t know his real name, where he lives or exactly what he does for Santa. But he’s an important dude here at the North Pole.

Department of North Pole Workplace Safety
Elf Grumbles
He’s very short and despite his name he is very jolly. And he is also very smart. Elf Grumbles inspects all the toys made at the North Pole to ensure they are safe for kids to use. His is a big job.