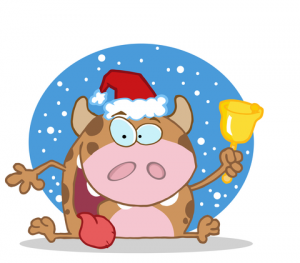 What a crazy night at the North Pole!

The Annual Halloween party is usually a fun event but things really went nuts with this year’s event. Santa’s decision to use a theme for all the costumes was very inspired. The theme this year was “Noah’s Ark” and as we predicted yesterday there were a lot of animal costumes last night. The grand prize was given to Elf Dino and his wife, Elf Dotty. They came as cows, a spectacular couple of black-and-white jersey-style costumes with real fir. The costumes were so realistic that Santa for a minute thought they were real cows until Elf Dino started talking. But the real surprise from Dino and Dotty didn’t come until later, during the food fight.

Winner of the funniest costume was Elf Ted, who came as an exploding chicken. He would come up to people and ask them to pull his wing and when they did all his feathers would shoot out from his costume and on to the floor. It always surprised the person. Elf Ted was quite ingenious in his costume design, too, because he used magnetic technology on both his costume and the feathers and never had to pick a thing up from the floor. He just pressed a hidden button somewhere on his costume and the feathers jumped up off the floor and right back on to his costume. Of course, we have to keep him away from the fridge all night because he kept getting stuck to the fridge but Elf Ted said that was something he could fix once he got back to the workshop. Ted’s wife, Elf Gayle, just came as a regular chicken. She did not explode like Ted did. “Chickens don’t explode,” Elf Gayle told me. “That’s just silly.” (Elf Gayle works in the Training Department at the North Pole, where she teaches Elf manners to new elves).

As usual the food fight was epic. Mrs. Claus was ready, she even had the North Pole fire department on hand with their hoses at the ready to help clean up. With Santa allowing food-themed fire arms we saw all kinds of flying marshmallows, pies and water balloons filled with Yoohoo. Elf Ted surprised everyone by starting off the food fight right after dinner with a single twinkie on a desert plate. He stood up and gave a speech, praising Santa for the “best Halloween party ever” while everyone waited for him to finish talking before eating their twinkies. He pressed another hidden button on his suit and the twinkies exploded starting chaos like you’ve never seen. Food was flying everywhere.

Elf Wally brought a baloney launcher. Elf Judy used a salad shooter to fire off sticky jello. And Elf Gary used an ice cream scoop to make ice cream snowballs that were flying everywhere. It was great fun and it ruined just about every costume. Except for Elf Dotty who kept squirting every one with milk from her udders. Oh, it was the silliest thing you’ve ever seen! She was getting everyone just soaked and they couldn’t do anything to her because Elf Dino had water-proofed their cow costumes with something and nothing stuck to them. They walked out of the party looking just as good as when they walked in and I think that was part of the reason they won the grand prize.

Today will be a slow day at the North Pole as clean-up from the party continues. Everyone will be coming by the long hallway by the lunch room to look at all the pictures and to see the video from last night’s events. This evening we have a big meeting to attend as Santa will talk to us about our production goals and schedule for the next few weeks. It is starting to get busy here at the North Pole and we’re excited for the season ahead!