Our North Pole activities give you 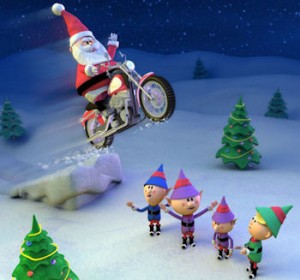 a lot of things you can do as you countdown the days to Christmas! On this page we list the many activities you can engage in on your own computer in your own home with those of us here at the North Pole — including Santa. Of course, it is all free and completely child-safe!

Name Santa’s Baby Reindeer — Santa has too many new reindeer babies at the North Pole and he needs help naming them. Can you suggest a name?

Email Santa — Santa receives millions of emails, even when it isn’t Christmastime. Click this link to get your message to the Big Guy through his North Pole post office.

Ask an Elf — Have a question for someone who works at the North Pole? Our elves take questions and try their best to provide answers about what they do for Santa and Operation Merry Christmas.

Help Name Santa’s Sleigh! — There are many traditions of Christmas — a few years ago Santa started a new one: having kids help Santa pick out a name for the sleigh.

That’s right, the sleigh gets a new name every year. And that is because Santa uses a new sleigh every year. The sleigh, like the Christmas tree, is a part of the Christmas family. And before Santa goes around the world he likes to give the sleigh a name just like he has a name for all his reindeer.

Will you help name Santa’s sleigh this year? There are just a couple of things to remember:

1. The sleigh ALWAYS has a girl’s name. Santa didn’t explain why this is. But he always refers to the sleigh as “she” or “her”. He always says things like “She’s a beauty this year!” or “Listen to her bells ring!”. So the name has to be a girl’s name.

2. Santa can only pick out one name. From time to time, we will post a list of names that have been suggested. But Santa won’t pick out the winner until Christmas Eve day. That’s right…you’ll have to follow the Santa Updates on Christmas Eve day and track Santa around the world with us in order to learn if your entry won!

4. What’s the prize? Why, a Merry Christmas, of course! (Santa will leave our winner a little something extra special in their stocking this year!)

Are you on the Naughty List? — So you want to get off of Santa’s Naughty list, eh? It is kind of a long process but it can be done. Just answer the questions asked of you. Think hard and do the best you can. Remember to give answers that are honest. And for goodness sake, don’t forget that this is Santa you’re talking to!

Once you’ve answered all the questions, you need to tell Santa in your own words what you’ve been up to (yes, it is kind of like a confessional!) and just what your plans are to reform. Just fill in the boxes below and we’ll email the responses directly to Santa on your behalf. If you’re sincere and believable, Santa may just write you back! Good Luck!

Become a Secret Spy for Santa — So you want to be an elf, eh? Getting to work at the North Pole takes years and years but you can accomplish the first step of full elfhood right here by becoming a secret spy for Santa. Just what is a secret spy? Some folks think it means spying on other kids to see if they are good. But that’s not true. Being a secret spy for Santa means watching your own home, your own neighborhood, and your own town for Santa and reporting any dangers that might exist for Santa on his Christmas flight. As a secret spy for Santa you have a duty to report directly to the North Pole anything you see. It might be as simple as bad weather. Or it might be a new flagpole, a flock of birds, a jet airplane or some other object in the sky that could get in Santa’s way. If you see it, you’ve got to say something. And Santa needs your eyes! Become an elf by starting your work for Santa as one of his Secret Spies!

Santa’s Secret Spies Report in Here! — Are you an elf? Need to file a report to the North Pole. Use this link, Elf!

Operation Be Nice — Santa knows all too well when someone isn’t being good. But it sure makes his day when he hears GOOD news about someone. Do you know someone who is nice? TELL SANTA. He just might bring a little something extra to put in the stocking of someone you catch doing something GOOD.