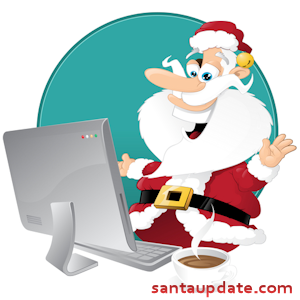 Of course, everyone knows that tracking Santa is better on Santa Update. Here is how we do it:

1. We produce Updates from the North Pole whenever Santa tells us to. Usually we count down the days to Christmas through the year with occasional news that affects the season ahead.

For a good example of what a news update looks like during non-Christmas times of the year, check out this post. It is important to check in frequently because what happens during the year usually affects Santa’s flight. During the months of January through September we usually post news once or twice a month — sometimes more if something special is going on.

2. Things get a little busier in October and updates come about once a week. A lot of things happen in the run up to Christmas. You don’t want to miss news like this.

3. By the time Thanksgiving comes around we post daily updates as part of what we call Operation Merry Christmas. These updates tell you what it is like to live at the North Pole, what Santa is doing, and all the things that are happening that might affect Santa’s Christmas flight. Here’s an example.

4. For a lot of folks December 24th is a big day. It is for us too. But December 22nd and December 23rd are JUST as big. That’s when the real breaking news happens, at least as it relates to Santa’s flight. Updates on these two days generally come every few hours. See this report for an example.

5. On December 23rd we partner with Kringle Radio – Santa’s favorite Christmas radio station — when they begin to broadcast 50 hours of tracking Santa live from the North Pole newsroom. To hear a little of what their coverage is like, click the big arrow below to hear a recap of last year’s coverage. It’s really cool.

7. Once Santa actually launches the sleigh we kick into high gear with updates every 15 minutes. We give you Santa’s position, the direction he is headed, what he is going through, how people where he is visiting is reacting, and full bed time warnings for areas where Santa will soon be visiting. Here’s an example of an update of while Santa is in flight.

8. We also collect tracking data from Santa’s flight control center and everything about Santa’s sleigh is shared on a live map at TrackingSanta.net. This site shares not only the map but detailed flight data concerning the sleigh, the reindeer and the weather. All you need to know!

9. We have available FREE Santa updates by text, offered through our site, JingleKringle.com.

10. Through out Santa’s flight we answer questions and seek help from Santa fans around the world. You can be an elf and report news from your area to help Santa. Just go to ElfHq.com.