Listed below are the latest episodes of the North Pole Podcast — a special production by elves about Santa, the North Pole, elf life and Christmas.

You will learn insightful information that you can get nowhere else and in no other way. Just elves talking like elves do!

The North Pole Podcast features elves from Kringle Radio News at the North Pole who interview expert elves on a variety of topics. Everything from Santa’s workshop to his reindeer to how elves eat, dress, work and live are discussed.

Better than a radio show, you can download them for listening any time you want!

Things You Don’t Know About Rudolph

Rudolph the red-nosed reindeer, as the world knows him, is indeed the most famous reindeer of all. Yet few really know his true story. In this episode Elf Crash Murphy, Santa’s eye-in-the-sky reporter elf who just happens to know all of Santa’s reindeer, shares never before disclosed information about Rudolph. This information is so new […]

Elf Crash answers questions in this latest episode of the North Pole Podcast. He tackles the issue of how to see reindeer fly, what a teacher should and should not say in the classroom about Santa and even why Santa occasionally misses someone’s house. These questions come from site visitors to SantaUpdate.com. We get them […]

Around the World in One Night

Elves Frank and Crash take on the difficult question of how Santa gets Around the World in One Night. It is one of the most common questions we get here at the North Pole. Truth be told, Santa does not really get around the world in one night – it’s more like two days. The […]

Reindeer are elves. This is a fact many people are not aware of. When most think of elves they tend to think of helpers in Santa’s workshop. But as we have tried to teach for many years now an elf can be anywhere in the world and an elf can do all manner of special […]

In a press conference held at the North Pole Santa announced the tracker elf recruitment goal for Christmas 2021. It is a stunning goal that has taken the entire North Pole by surprise. The Tracker Elf program, as Santa calls it, is in it’s 5th year. Through the program Santa recruits believers from all over […]

What Happens at the North Pole After Christmas

What happens at the North Pole after Christmas is not something that gets talked about much. There are no songs about it, no movies or television specials. Heck, people hardly ask about it. But I would tell you that the time right after Christmas is a very important time. In this episode of the North […]

In this special (if rushed) episode of the North Pole Podcast we hear from two superstar Santa Tracker Elves – Elf Lil Cream and Elf Crusader. They are just two of millions who have signed up at SantaTrackers.net to track Santa for Santa. The art of tracking Santa is not a new one. It has […]

Stuff You Don’t Know About Santa

Stuff you don’t know about Santa is the topic of conversation in this special episode of the North Pole Podcast. By request from several teachers and many parents we were asked to do a podcast episode about the more unknown things about Santa Claus. With so many missing school or under quarantine due to the […]

The Tracking Santa App is coming! In this merry and brief episode of the North Pole Podcast Elf Frank Myrrh talks with Elf Winslow, who was put in charge of the app project last spring. Elf Winslow confirms that the app is coming this year. He spoke of the instruction Santa gave about the app […]

The North Pole Halloween party is one that we cover in the news every year. It’s a big deal. And we have been getting a lot of questions about it. So Frank and Crash decided to sit down in the studios of Kringle Radio to discuss where Halloween comes from and why we celebrate it […]

Santa and the Coronavirus

Santa and the Coronavirus are the subject of many letters coming to the North Pole and coming to Elf Crash Murphy specifically. People just want to know what the virus means for Christmas and for Santa. In this episode Crash answers questions coming in from Christmas and Santa fans around the world. Crash and Elf […]

Tracking Santa with the North Pole

Tracking Santa with the North Pole is a whole new level in Santa tracking. We have been doing it here at the North Pole for decades but for the world at large it has only been available for the last 30 years or so. It is not like Santa tracking you see anywhere else online […] 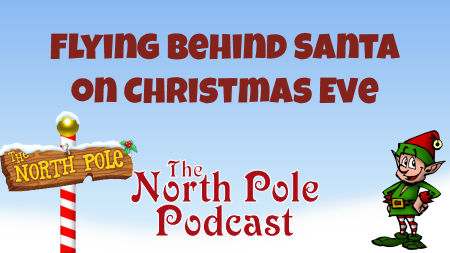 Flying behind Santa on Christmas Eve is like watching your favorite Christmas movie. Now you don’t have to dream about. You can hear about it from the Elf who actually does it. Imagine being the elf who follows Santa’s sleigh on Christmas Eve. His name is Elf Crash Murphy and he sees everything Santa does […]

After many delays Santa finally made the announcement we have been hearing about for days — and, boy! — was it a big one! The crew of the North Pole Podcast were there and recorded it live…well, sorta. So we’ll let them tell the story of what Santa had to said and not say anything […]

Working as An Elf at the North Pole

There was nearly a riot getting elves into the studios of Kringle Radio to hear this session recorded. When elves heard what the topic of this podcast would be they just wanted to be there to hear it for themselves. It is not because they don’t know the Secrets of Santa. They do. But they […] 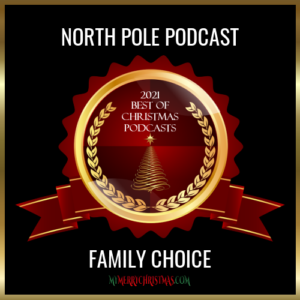 The North Pole Podcast was voted by Parents and Kids with the Family Choice Award of the Best of Christmas Podcasts 2021.