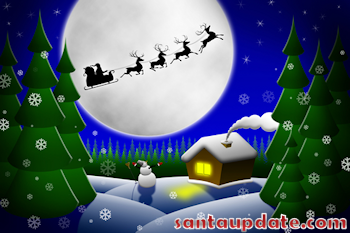 Elf Vernon has launched in Santa’s Sleigh for one final test flight, just a little more than 24 hours before Santa’s actual launch for Operation Merry Christmas 2013. All the elves at the North Pole are talking about this. It is historic.

“It’s a good thing the sugar cookie pool isn’t going yet,” Elf Maxwell said to me earlier. “Santa would have elves betting against him like crazy!”

The sugar cookie pool is something the elves do while Santa is away on his flight. They use sugar cookies instead of money to bet whether or not Santa gets around the world on-time every Christmas. We viewed this as just a fun activity but we kind of watch it now to see how elves are feeling about Santa’s chances.

Santa has never failed to deliver the world on time. Ever. So the smart bet is to put your cookies on Santa.

The tracking center will be keeping tabs on this test flight and will let us know if anything goes wrong.

Meanwhile, we remind you that Christmas Eve is just a few hours away for folks living in the South Pacific and areas close to New Zealand and Australia.