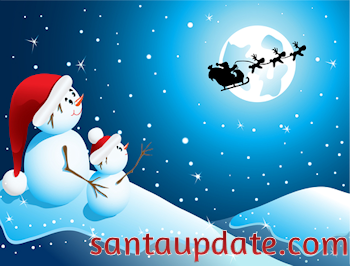 Tensions are running high at the North Pole as we mark just 24 hours left in our countdown until Santa officially launches the sleigh for Operation Merry Christmas 2013.

The workshop is in chaos, with elves running around like mad trying to complete the production quotas set by Santa’s list.

The tracking department is keeping an eye on several things all at once now. Santa’s sleigh was launched on a final test flight about an hour ago with Elf Vernon at the helm. They are tracking them over southern Canada at this hour. They are also keeping a close watch on weather all over the world but especially on a terrible storm forecast later today here at the North Pole that could affect Santa’s launch.

From all over the world mail continues to pour into the North Pole post office, urging Santa to leave earlier, wishing him good luck and telling him all the last minute wishes from believers everywhere.

Here in the North Pole newsroom we’re gearing up for 50 hours of broadcasting on Kringle Radio, set to begin in just three hours. In addition to the information you receive here you can follow along with tracking data from TrackingSanta.net, receive news from us by text at JingleKringle.com or listen along to great Christmas music with occasional newsbreaks at Kringle Radio.

Things are getting very exciting here.