Contact has been lost with Santa Claus as he crossed the Continental Divide of North America somewhere over the Canadian Rockies. Phone, radio, computer and video feeds all went down, both at the tracking center at the North Pole and via the monitors set up at the North Pole Christmas Eve party.

Elf Quinton rushed over to confer with Elf Billy in the tracking department but neither are inclined to declare an emergency just yet.

For some reason, Santa has chosen to take the sleigh to a very high rate of speed and at a very high altitude.

“It is doubtful that anyone can see him from that altitude,” Elf Agent X told me. “He is so high and going so fast no one will be able to spot him.” Elf Agent X would know, he’s got spotters set up all over the world. “The spotters in North America, to be honest with you, aren’t even ready yet. They are likely asleep. We won’t need them for another 12 hours or maybe even more.”

Elf Ed Zachary was asleep at his desk when all the phones started ringing here in the newsroom. When I told him what was going on he merely batted it away. “Santa is taking the new sleigh out on a joyride,” Elf Ed Zachary said. “Mark my words, this is nothing to worry about. Santa is just goofing off.”

If he is just playing around Mrs. Claus is going to get mad at him. I saw her a minute ago and she seemed a little worried. 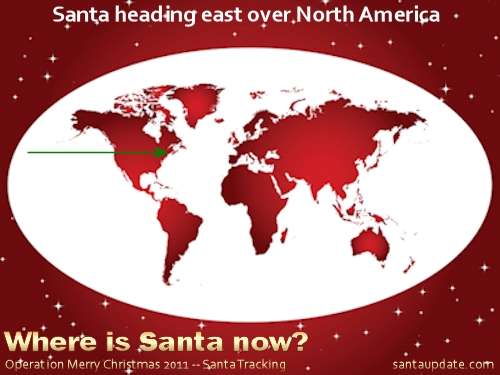