Santa has taken the sleigh due East in a test run meant to push the limits of his new sleigh — and we’re pleased to announce that Molly (the name of the sleigh that Santa selected from our contest just a short while ago) is now the fastest sleigh ever topping speeds nearing the speed of light. Yes, the speed of light, folk!

Over in the Research and Development Department Elf Quinton and the boys on the Sleigh team can be heard whooping and hollering at the accomplishment. The speeds were so great that Santa lost all contact with the North Pole. “The sleigh can go that fast but the radio, the computers and the sleigh cam cannot,” Elf Billy explained to me. “It is doubtful that Santa will need that kind of speed any time on his journey. But it is nice to know that he has that capability in case he gets in any trouble.”

Santa took off about an hour ago and is yet to make his first visit. However, plenty of time remains as much of the Far East hasn’t even been given their bedtime warning. We don’t know where Santa will stop first but we will keep you posted. 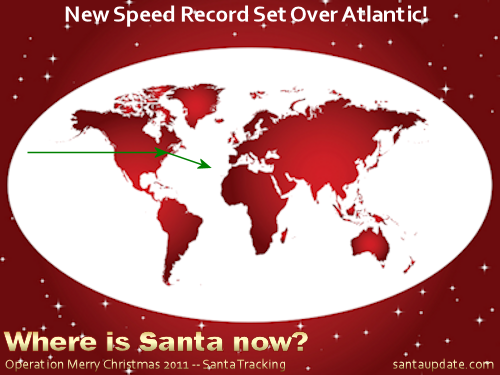 Santa Streaks Across North America, Contact Lost Santa Over the Indian Ocean as He Heads South
Scroll to top