It is still Christmas Eve in Australia…barely…so it might be a little too early for Santa to make a stop there. However, we’re receiving reports from tracking stations manned by elves in Australia that are hearing by way of military radio frequencies that Santa has been spotted on radar.

“Indeed, I can confirm contact from the Australian government,” Elf Billy just announced. “They have offered fighter jet escorts or any other support Santa might need to deliver in Australia. Santa thanks the government of Australia and will let them know if he needs anything.

At the North Pole there is a tradition of sugar cookie bets that are placed on Santa’s success. Santa has never failed but in the past hour bets have turned against him as a few elves are willing to take the risk for the big cookie payoff. The fact that Santa is an three and a half hours behind his original launch schedule has placed doubt in the minds of some elves that Santa might not complete his rounds in time.

As for me, I’m betting on Santa. He’s a sure thing. 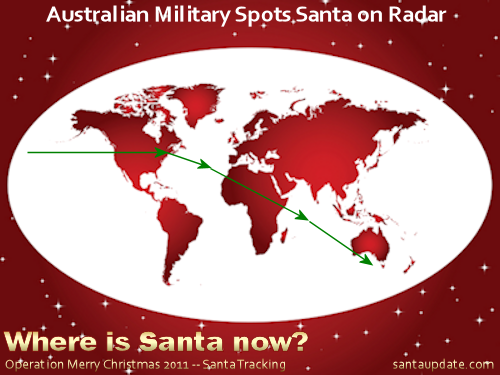