Santa has blazed south into Africa for the first time, covering eastern coastal cities and Madagascar. He continues to keep a terrifically fast pace.

Elf Billy tells me that Elf Hugo has been sent to fetch the A-Team of Santa’s reindeer from where Santa left them hours ago to rest. Elf Hugo will be picking up Santa’s new sleigh — which has had the repairs it needed completed in the past little while and will catch up with Santa somewhere soon.

Why Elf Hugo? According to Elf Quinton, years ago Elf Hugo was a champion sleigh racer. He says that if anyone other than Santa in the world can handle the speed and the reindeer at high speeds it is Elf Hugo. Very interesting. I never knew that about Elf Hugo. 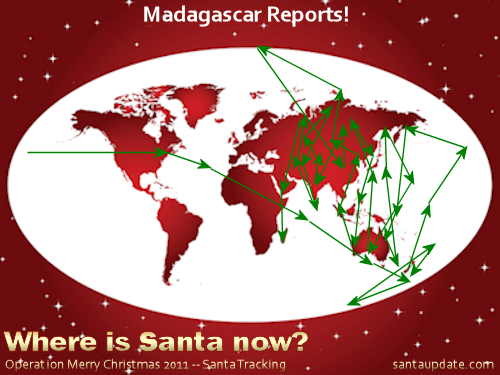