We’ve got reports coming in from all over the Middle East. Oman, Dubai, Jordan, Saudi Arabia, Baghdad — cities, towns and entire countries are all reporting Santa’s visits.

“We’ve got another new record!” Elf Quinton exclaimed. “Santa is moving faster than ever!”

This is not unusual at this stage of Santa’s flight. In fact, many speed records have been set over Eastern Europe, the Middle East and Africa in the past. If you look at a map this area of the world has more land area to cover than just about any other area of the world. Santa is well known for telling the reindeer to “step on it” when visiting this part of the world.

In other news Elf Hugo has been dispatched from the North Pole in a special sleigh this past hour. I don’t know where he is going or why but will find out. 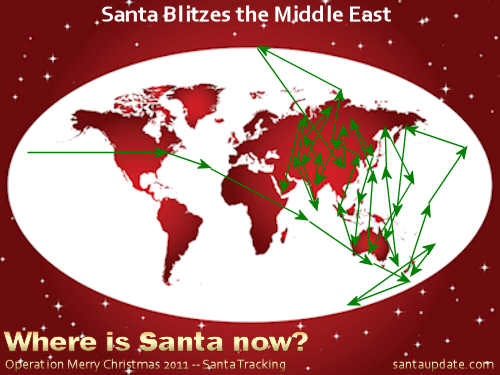