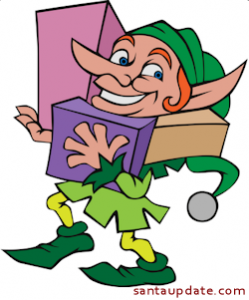 Once again, Santa has taken charge. After reading yesterday’s Santa Update the Big Guy got on the phone right away. There was no way the North Pole was going to come to a standstill “because of some little old snow storm”, Santa told us. He immediate gave orders that got things moving.

First he told Elf Quinton to unplug every unnecessary thing at the North Pole. Christmas lights, refrigerators, freezers, clock radios, ovens and stoves were all unplugged. Then, he turned off all the lights. That’s right, the North Pole has gone dark. Mrs. Claus has put elves to work distributing candles and lanterns around the North Pole, especially the workshop.

Elf Bernard has the workshop now working 24 hours a day with every workstation filled. All power has been diverted to the workshop for the tools and the production lines. “We’re going to break records,” Elf Bernard said. “We have more elves working here than ever before. Elf Wally and Elf Hugo have stopped what they were doing in Wrapping and at the North Pole post office and those elves are now working for me, making toys. We’re in high gear right now.”

It is a big of a strange feeling not to have Christmas lights on but there is something oddly charming about working by candlelight. As for me, I’m working my computer by battery to bring you this Santa Update. Until this storm blows over Santa says all power goes to the workshop.

Even Mrs. Claus is working without power. “The boys from Elf Quinton’s crew came and diverted cold outside air for my fridge and my freezer,” Mrs. Claus said. “How simple is that? It’s cold outside so they just piped in the cold air and my appliances are working like normal. We have the old wood burning stove fired up and we’re making cookies the old fashioned way. It reminds me of the old days!”

Indeed, things are feeling much brighter at the North Pole since Santa had all the lights turned off.