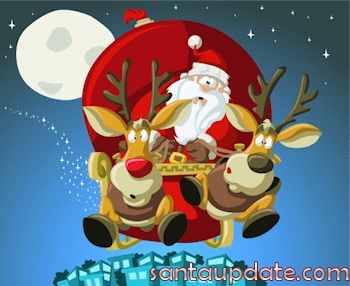 If you have been following along with news coming from the Tracking Center at Tracking Santa.net you already know that Santa’s sleigh has been undergoing all kinds of test flights.

In fact, recent problems in Africa in test flying the sleigh has caused Elf Quinton to return the sleigh to the North Pole for redesign. It is a little late in the season for a redesign and Elf Quinton wanted me to be sure to tell you that they are not starting over. They are just making some modifications to the sleigh.

Santa’s sleigh is one of the most complex vehicles in all the world. Many people don’t think it is that difficult because it isn’t actually a machine — it is powered by reindeer, as you know. But Santa’s sleigh has to be able to fly at the fastest speeds known to man, in all kinds of weather, and pulling a load unlike any other in the history of freight. It has to be able to do a lot of things a normal sleigh cannot.

So a lot of science goes into the design and testing of the sleigh. Elf Quinton notes that it is still early and that they have plenty of time to get it right before Santa flies on Christmas Eve.