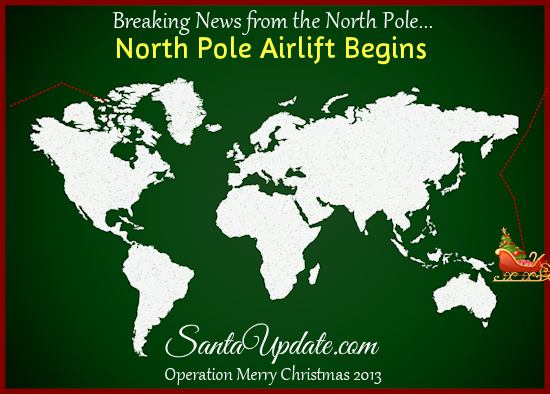 We’ve told you already about the sleighs leaving with late work coming in from Santa’s Workshop and the Wrapping Department but there are other sleighs leaving too. They are filled with elves dressed in black and they appear to be headed to various parts of the world.

They could be additional elves working to track Santa in places where the weather is rough. Or they could be elves from the Security Department under the direction of Elf Agent X. We haven’t had any news to that effect but these elves who are leaving are all very serious and focused elves. I’m not sure what they are up to.

Meanwhile, the clock is ticking and places just beyond the International Dateline are already experiencing Christmas morning…very, very early Christmas morning. These are remote places way in the far South Pacific and a few places up near the northern Siberian coast line. Some times Santa visits these places first but in pre-flight meetings Santa told us this would be a very unpredictable flight this year due to weather and “other concerns”, whatever that means.