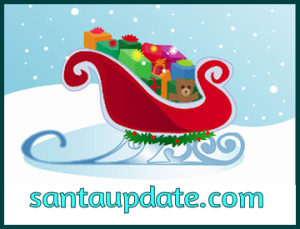 The launch of Santa’s sleigh is about four and a half hours away. Final preparations for the sleigh are underway.

We’ve received word that final preparations for Santa’s sleigh include the packing of food on board. Santa will have all kinds of food to choose from and so will the reindeer.

“Folks give the reindeer lots of carrots and celery during stops on Santa’s flight,” Elf Victor said. “They love that but what they want more than anything some times is fresh water. A lot of kids leave milk for Santa but forget what they reindeer can drink. So we’re putting plenty of water on board the sleigh.”

Santa will have a fully stocked fridge with cold drinks, fresh produce, plenty of sandwiches, and even a small microwave should he want to have something warm. Mrs. Claus has also packed a couple of thermos bottles with his favorite soups.

Coming up next: A sleigh traffic jam?
Where it is Christmas Eve now: Greenland

Secrets of the North Pole Sleigh Craft Carrier Sleigh Traffic Jam Over Canada
Scroll to top
%d bloggers like this: