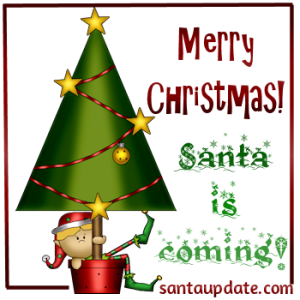 We know that it is designed in the shape of a Christmas tree, a clever idea that allows the carrier to launch and land multiple sleighs easily as well as lending a festive look to the huge vehicle.

But it is also a flawlessly functioning replica of the North Pole. On board is a 2nd Santa’s workshop where elves are working and have been working for weeks to make up for lost production in the regular workshop.

From an earlier update by Elf Crash Murphy we know the sleigh craft carrier is made entirely of sweet, edible materials and that cold eggnog comes out of the cold water spigot and hot cocoa comes out the hot water spigot.

Some are asking what the plans are for Jingle Bell 1 after Christmas with a few speculating that Santa will travel the world to give kids a glimpse of what the North Pole is like. We have yet to hear that from Santa so we’ll refrain from making an announcement.

It is hard to know for sure how complete the effort is now but elves at the North Pole – now that they know what Jingle Bell 1 was designed for – are very confident can and will deliver to the world on time.

Coming up next: Getting Santa’s sleigh ready
Where it is Christmas Eve now: Paraguay

Listen to an interview with Elf Barnaby who tells us where Santa is and what he is doing: