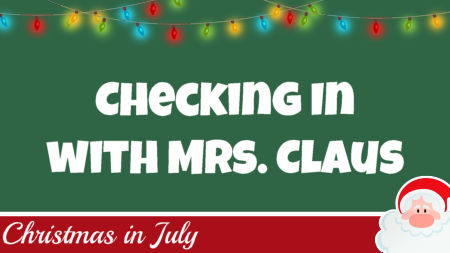 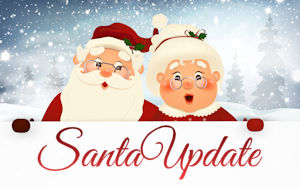 Mrs. Claus is kind of in charge of things during Christmas in July. Santa, of course, is busy. He is doing Toyvember like most elves are. But Mrs. Claus is making things happen and shaking things up.

Her first rule of Christmas in July is that the elves — and Santa — can only work on their new toys for 8 hours a day. They have to be done by 4pm. Then we all belong to Mrs. Claus.

Fortunately for us, since we have no virus here at the North Pole, we can still gather together in groups.

That is what Mrs. Claus does. She puts us in groups to work on what she calls “what you do during Christmas in July”.

For her, that’s making Christmas stuff.

For example, on the first day of Christmas in July we made Christmas ornaments. It was actually kind of cool. For an office elf like me it was an adventure. I only use my hands for keyboards and computers. Many elves are handy — I’m not. So for me it was a really good activity.

But some of the elves were bored.

Like the guys from the sleigh design department. Those elves know how to work with their hands. They are very technical too. They wanted to design an ornament that would not break if it fell off the tree. Mrs. Claus just told them to be quiet and do as they were told.

Santa had a good laugh at that.

Mrs. Claus will be teaching us the art of kitching cleaning tomorrow and then the next day we get to make pies. If we do that successfully, Mrs. Claus promised she would show us how to make eggnog.

That would be a really big deal!

I feel there is a different spirit about things this Christmas-in-July. We are very excited about Christmas coming up but there’s a Christmas-is-here feeling already at the North Pole.

Maybe it is because Mrs. Claus is in charge and we are doing productive, Christmasy things.

There is not much news to report, as you will notice from the North Pole Radio News Team report from Kringle Radio below. But I can tell you that within days we will have some major news to report. I can’t say anything now.

But be sure to check in with us every day in July. You’re going to hear some news, I promise.

I hope you are enjoying your Christmas in July where you are and that you are doing good things, too.

Virus Update from the North Pole