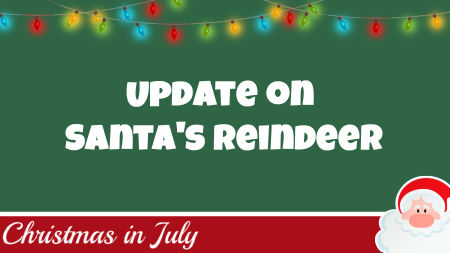 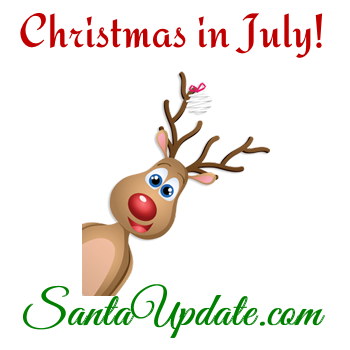 Hi everyone! Santa’s reindeer are a very important part of the team here at the North Pole and after yesterday’s radio report I knew we better get ready to answer some questions today. So I met with Elf Victor late last night to see what he could tell me.

He was very forth coming. He said it was very normal for the reindeer to still be gone in the middle of July.

Years and years ago Santa used to just keep his reindeer here at the North Pole. After all, they are not just reindeer they are elves.

But he began to notice something. He noticed that while they were happy to serve Santa and participate every Christmas they just were not themselves here at the North Pole. Santa didn’t think they were happy.

One day, he decided to talk to Comet about it. Comet is a very proud reindeer and he loves Santa he would never let him down. But Santa knows as well that Comet is very truthful. He never lies.

I do know not exactly what was said. But what Santa learned was that the North Pole is not always a happy place for reindeer.

To be honest, the North Pole is not naturally an easy place of anyone to live. We do not grow things outside here. There are no trees, few mountains, and not a whole lot of pretty things to look at. If we want to grow food we have to do it in a greenhouse.

Santa began to think about it and decided one day, “Why make the reindeer stay here all the time? Why have them away from their big families. Why not send them home and have them come back every Christmas?”

So that’s what they do. In January, just a few weeks after Christmas is over, the reindeer begin to say goodbye. They leave one at a time, sometimes several in a day. But by the end of February they are all gone.

The begin to come back, again one at a time, some time in September. Usually all are back at the North Pole in late October. They spend that time from late October until Christmas Eve training together in order to get ready to fly for Santa.

Santa and Elf Victor believe this is a good arrangement.

But just to make sure they are okay Santa has several very large ranches set up in high mountain locations all over the world. The reindeer come from all continents and in a few different varieties. During the year, Elf Victor and his staff of elves will travel to these different ranches to observe the reindeer and see if any need help.

Elf Victor told me last night the reindeer are just fine. He said not one of them is sick or has a problem right now. He said they are very happy.

Reindeer keep busy when they return to the mountain homes. Not only do they get to be with their families they get to do what they do. Blitzen, Elf Victor says, comes from Austria. He said that he heard Blitzen was spending his off season looking for mushrooms. Blitzen has just learned to eat mushrooms and loves them.

Elf Victor wants you to know that the reindeer have nothing to worry about with this virus. He says they rarely have any kind of human contact. But if they did, medical expects say reindeer would probably never get the virus because their bodies work differently.

So the reindeer are fine. There is no need to write in to ask about them.