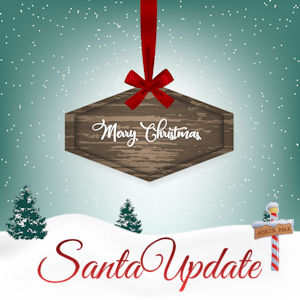 Tracking Santa by text is going to be a thing this year. We do not know what makes this year so different. But record numbers of people are signing up to receive texts of Santa news once he launches from the North Pole.

We did open the sign-ups early this year but the numbers remained fairly low until Thanksgiving. (If you want to get on the text list, just text the word SANTA to 844-448-1532.)

Since Thanksgiving the numbers have sky-rocketed. We would like to understand why.

In fact, we would like to understand all of our crazy numbers right now. People are visiting the websites and our social media channels, listening to our podcasts and asking questions more than ever. The number of messages to the North Pole via the North Pole Post Office is equally off the charts.

Never have we seen interest in Santa and North Pole news as we are this year.

So you tell me, what is it? What’s going on?

Is it because more people are home and maybe bored? Are there new believers in Santa out there?

Over at SantaTrackers.net, our effort to recruit new elves to track Santa for Santa, we are having no issue finding new elves this year. At first, we felt the goal Santa set was a tad high. But now it looks like we will meet it easily and likely surpass the goal by several million.

Oh, all this reminds me. We are seeing these crazy weird numbers without having the app launched yet. We’re getting a lot of questions about that. I’ll just tell you the app will be out VERY soon. They are just putting the final touches on it. So be patient, it will be here way ahead of Christmas.

If you have any answers for me, don’t be afraid to speak up in the comments below.

Lots of Reindeer Babies at the North Pole
Scroll to top