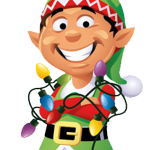 Elf Frank Myrrh is one of the original North Pole news broadcasters on Kringle Radio.

Here is a news report Frank filed from the North Pole Tracking Center last Christmas in the hours before Santa launched:

Frank is single, lives alone with his cat Nero, and enjoys watching documentaries and baseball in his spare time.