We’ve received numerous reports now from New Zealand of Santa’s visits! In a few hours now children and families will awaken to evidence that Santa has been there.

Ever since Santa took that speed rush over North America to set the new speed record the sleigh cam hasn’t worked right and Mrs. Claus wants it fixed. But Santa said he is too busy to look into it right now so Elf Quinton has dispatched a sleigh to catch up with Santa and look into the problem.

Elf Hugo reports that kids in Hong Kong are writing in asking when they can go to bed. Officially, Santa hasn’t given the bedtime warning for any part of China except for the coast but I’ll just tell you now that if you’re tired, go to bed and don’t wait for Santa to instruct you. 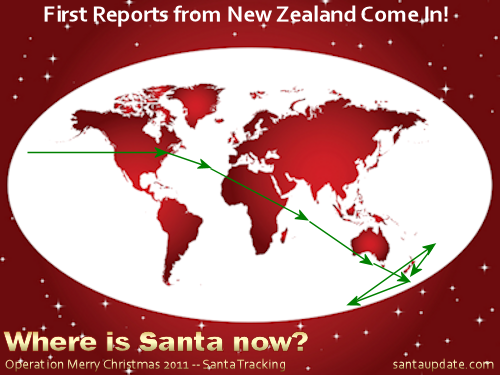